Much is made of “The Secret” nature of Freemasonry and how we are a “Secret Society” but as the joke goes, “If we are so secret why do we put big signs out the front”.

The fact is that Freemasonry is not really a secret society, and yes we do have things that we keep secret for members, but for a moment lets just put that all into the context of history. 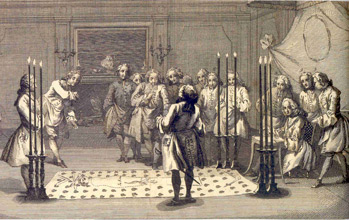 Freemasonry draws its roots from a time when if men were found discussing things of a scientific nature or ideas and concepts that ran counter to those of the Church of the Day, then those men (and women) ran a very real risk of being branded a heretic and suffering a very real and nasty fate.

In Freemasonry was around long before the and came out in the open at least 100 years before electricity. So members needed secure ways to identify themselves to each other when they went visiting Lodges in other locations.

Today, many of the “” secrets and mysteries are available for anyone to find on the internet with just a cursory search. Now some of the information you find may be correct but there is also a lot of disinformation about Freemasonry posted by various people and groups for their own reasons and motivations.

In recent years Freemasonry has opened its doors to the public to show that there is nothing sinister going on and to counter much of the disinformation.

So why do we still have “Secrets

If anyone has ever been in a personal development group or workshop then they will also have an agreement not to divulge the information or experiences that are shared among the group. Freemasonry is no different and granted ours may be slightly more elaborate and a part of the initiation process but the essence is still the same. A Brother should feel free to share among Brothers without concerning himself with being the subject of idle gossip.

But the ultimate truth is that the Genuine Secrets of a Master Mason cannot be passed from mouth to ear, nor can they be written down to be shared. They can only be found in own heart, after contemplation and study on the precepts and moral codes which Freemasonry seeks to impart through its initiations, practice and ceremonies.