By 1980, this building was in need of repair and with a committee led by Wor. Bro. Dean Hammer-Old funds were raised by donations, personal loans and a loan from Grand Lodge of $12,000 for its replacement. The present building was completed in May 1981 and was formally dedicated at deferred Installation on 25th September 1982 by M.W.Bro. Bill Morgan.

The Lodge prospered through the 80s and 90s, and all loans were cleared by February 1996. 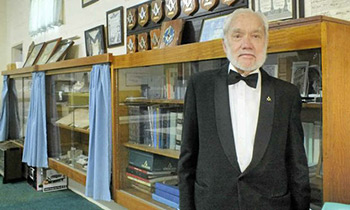 The Lodge celebrated its 75th Anniversary with a Jubilee Meeting presided over by Wor. Bro. John Clay, W.M., on 6tth March 1993 with a special ceremony written for the occasion, in the presence of M.W. Bro. Sir Walter Burnett who as a Maleny resident was familiar with the Lodge’s early days. At the banquet prepared by the lodge ladies, a large programme of harmony was arranged by Organist. R.W.Bro. Christensen.

The Lodge has participated in all Grand Lodge Charity Drives including Leukaemia for which $4000 was raised, principally from a concert, while continuing its own local activities of presenting a Citizenship Award to a graduating student of the Montville School annually, and support to local charities annually with proceeds of bequests from the Late R.W. Bro” King and Ward.

The lodge remains supported by an active membership and contributes and participates fully as a popular unit in the visitations programme of District Lodges. It meets on the second Tuesday of every month except September and January, commencing at 7.30 p.m. Installation takes place on the first Saturday in September.