Here are a few of the more popular questions we get asked as Freemasons, If you have something else you would like to know we have a form at the bottom of the page that you can fill in to send to us.

Ask any Freemason this question, and you’ll probably get a different answer from each one of them!
Freemasonry means different things to each member.

This tends to be the question most people ask so we have a dedicated page to it. click here

Is Freemasonry a Religion?

The simple answer is No. Freemasonry is not considered a religion nor does it seek to supplant a  religion. It is not considered a religion because as Freemasons we do not have any particular dogma that a Brother must follow. Each Mason is encouraged to explore Freemasonry and what it means for him. The rituals and symbols provide a framework for contemplation and meditation so that each of us will come to our own particular understanding of the Craft.

Do I have to believe in God?

Yes, each Freemason before being allowed to join a Lodge must profess his faith in a Supreme being, whatever that means for him.
Different Holy Books. 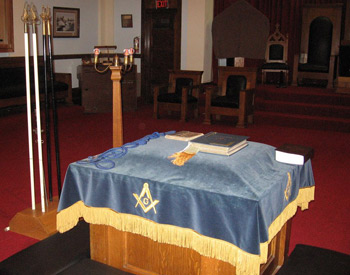 The Bible most commonly used is the standard Authorized King James version and will always be present in an open Lodge, but as the organisation welcomes men of many different faiths, we call it the Volume of the Sacred Law. In in some there may be several such books open upon the during a ceremony. So when the Volume of the Sacred Law is referred to in ceremonies, to a non-Christian it will be the holy book of his religion and to a it will be the Bible.

What happens in a Lodge meeting?

As with any there is of administrative and business details to take care of, Minutes of the last meeting, proposing and balloting for new members, discussing and voting on financial matters, of officers, news and correspondence. Then there are the ceremonies for admitting new Masons and the annual installation of the Master and election and appointment of officers. Most meetings close with a supper, buffet or a meal, depending on the occasion.

How much does it cost to become a Freemason?

It varies slightly from Lodge to Lodge. On entry, there is an initiation fee. A member pays an annual membership to his Lodge which covers his membership and the administrative cost of running the Lodge and a contribution to the United Grand Lodge of Queensland. it is usual to have a meal after the meeting and join in the fellowship. It is entirely up to the individual member what he gives to Charity, but it should always be without detriment to his family life and other responsibilities. 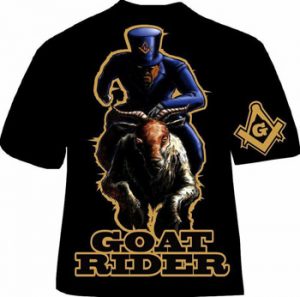 What sort of commitment of time do I have to give?

most lodges meet once a month, with at least practice meetings and management meetings for Lodge officers and members. It is expected as a member of the Lodge that you attend the monthly meeting in as much as family and work commitments allow.

What’s the story with the Goats?

Despite popular Freemasons do not ride Goats in their lodges. Goat racing is a very noisy and smelly affair and tends to make a mess of the carpets. In it is an old joke, often perpetrated by Masons themselves on nervous initiates just before we blindfold them.

It didn’t help that some early ritual books from the fraternity referred to God as “God of All Things” and abbreviated it as G.O.A.T. That was quickly changed, and God is now referred to by Masons by the acronym G.A.O.T.U., for Grand Architect of the Universe.